Deadline for submitting an abstract: 30 April 2019

The Institute of Political Science of the University of Wroclaw invites students and PhD candidates to submit their proposals for the XVI International Student Conference “Politics & Society in Central and Eastern Europe”, 15May 2019. The conference is designed to enable the presentation of research findings of young researchers interested in current developments in Central and Eastern European politics and societies.

The theme for the upcoming conference is “Political landscape before the European Elections”.

Citizens of all Member States of the EU will go to the polls at the end of May for the ninth time since the first elections in 1979. The upcoming elections to the European Parliament will be the first after Brexit. The expected very soon withdrawal of the UK from the EU toa significant extent sets the scene for the elections. Increasing numbers of European parties are calling for reforming the structure of the EU through limiting its role to economicintegration in order to enhance the sovereignty of the national states in shaping domestic policies and legislation. We can observe an increasing popularity and consensus between populists and right-wing parties that have been creating a relevant counterweight to social democratic parties. Besides the Brexit case, particularly politicians from some Central and Eastern European countries have considered alternative international initiatives such as the Visegrad Group and historical idea of Intermarium (the Isthmus). In this light, the policy of Central and Eastern European (CEE) countries will influence the future of the EU. The elections to the European Parliament will reveal the attitudes of CEE citizens legitimizing or delegitimizing current positions of their governments. Foundation Robert Schuman (2018) defines four factors determining the structural problems of the EU:

We welcome proposals addressing the following as well as other topics related to the theme of the conference from the CEE perspective:

To submit your abstract, please fill in a form (DOCX / 15.60 kb), and send it to political.science@uwr.edu.pl. 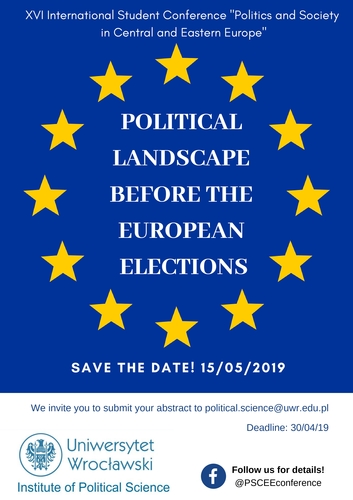